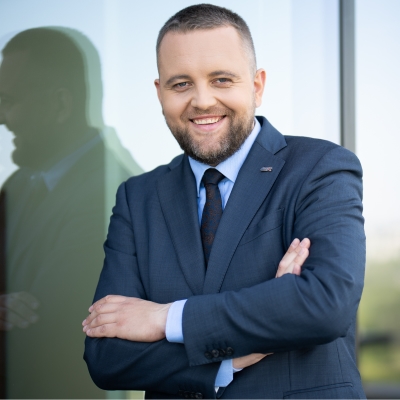 Mr. Radosław Pacewicz is a graduate from Warsaw University's Faculty of Management. In his professional career he has concentrated on sectoral market regulation. Prior to joining UTK he worked in the Office of Electronic Communication (UKE), where he was responsible for the analysis of the costs of mobile operators in terms of regulatory obligation, the preparation and implementation of the LRIC bottom-up model.

In 2011 he transferred to the Office of Rail Transport (UTK) to the position of Councillor to the President. The following year he was appointed the Director of the Department of Railway Market Regulation, being responsible for conducting various regulatory proceedings on non-discriminatory access to the railway infrastructure, approval of access charges, licensing of railway undertakings and market monitoring. He served at this post until 2015.

Additionally, starting in March of 2016, Mr. Pacewicz was elected the new IRG-Rail Chairman for the period of Polish chairmanship of that organisation.

On 4 September 2017 he received the nomination from the Prime Minister of the Rpeublic of Poland to the post of the Vice-President of UTK.

He is married and has two daughters. His passions are motorcycling and travelling.