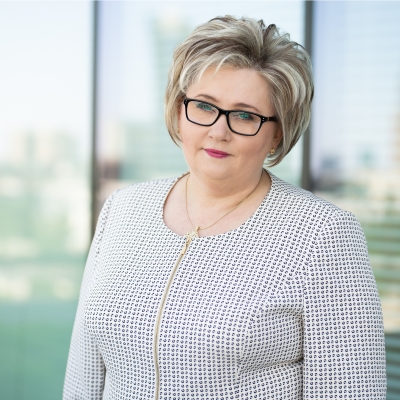 Mrs. Małgorzata Kalata is a graduate of the University of Management and Marketing in Warsaw (Faculty of Management and Marketing in the field of finance management). In 2000 she passed the exam for candidates to the position of supervisory board members in State Treasury companies. In 2004 she completed graduate studies in the field of accounting and finance and in 2007 - graduate studies in internal audit and compliance control in the public finance sector.

From 1989 to 2002 Mrs. Kalata worked at KZA Zielonka Sygnalizacja Teletechnika Automatyka S.A., where her last position was a deputy accounting officer. In 2003 she started to work in the Ministry of Infrastructure (at the Bureau of International Transport) as the Manager of the Finance and Accounting Team. After the restructuring of the Ministry (as a result of the amendment to the Road Transport Act of 2010) she was transferred to the General Inspectorate of Road Transport, where she worked until 2013.

In September 2013 she moved to the Office of Rail Transport, taking the position of the Deputy Director in the Administration and Finances Office, where her scope of duties included, among other things, supervision over the duties of the Finances Team. She was also responsible for the proper spending of budget resources, took part in preparing documents with regard to the draft state budget and reports on the implementation of the state budget in UTK, as well as performed analyses and evaluations on the financial processes at the Office of Rail Transport. In February of 2016 she was appointed to the position of the Director of the Administration and Finances Office.

On 4 September 2017 Mrs. Kalata was appointed by the President of UTK to the position of the Director General of UTK.